The agenda addresses multiple areas of action, such as poverty and health, and plans to build local economies by addressing people’s social needs. These are issues that concern all countries and all individuals without distinction, and represent the basic and essential steps on the path towards a more equal and sustainable society.

In short, the 17 Sustainable Development Goals are: 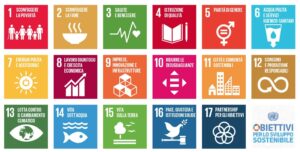 In addition to the commitment of nations, private companies have also taken the front line to ensure the achievement of the objectives within the established time frame. It is now clear that without cooperation from everyone, including individuals, it will not be possible to get close to the finish line.

Today, the total weight of our homes, cities, household devices, cars, highways, airports, supermarkets, factories, and space waste, is bigger than the weight of biomass, which is made by all animals, plants, insects, and microorganisms of the world. In short, it means that at this moment there are more objects produced by the human hand than elements produced by mother nature. Cities weigh more than forests and plastic weighs twice as much as the lands and sea animals that populate the planet.

Regarding some poverty measures, only minor improvements have been made: the 2018 progress report states that 9.2% of world workers living with family members earned less than $1.90 per person per day in 2017, representing a less than 1% improvement over 2015. Another problem is the recent increase in world hunger. Rates were steadily declining, but the 2018 report said more than 800 million people were undernourished worldwide in 2016, up from 777 million in 2015.

Another area of ​​the Sustainable Development Goals that need more progress is gender equality. Several news outlets recently reported that no country is on track to achieve gender equality by 2030. On a scale of zero to 100, where a score of 100 means equality has been achieved, Denmark has been the best-performing country out of 129 countries with a score slightly below 90.

“Toward 2030, What are you doing” is the title of the project born in Turin that combines street art with the 2030 agenda for sustainable development. A provocative question that forces reflection by asking the viewer what they are doing for the future of their city, future generations, and the globe.

In recent years, national and international artists have created giant murals that interact with citizens, promoting positive messages, and good practices that each of us can put into practice in everyday life.

A beautiful project that even added a record to Turin, which has become one of the cities with the most street artworks in the world.

When you move around the city, remember to look up and admire these 17 works that, from the center to the periphery, are a reminder of the challenges for the future.

This campaign combines two fundamental aspects: the environmental vocation of the city and the attention to the culture as an engine of urban regeneration, as a means of raising awareness that encourages everyone to become active protagonists of a positive and urgent revolution.

Because in addition to global efforts, there are ways that each of us can contribute to progress: use the bicycle or public transport; choose products without packaging; reduce plastic; do not waste water; learn to recycle; adopt a healthier diet that respects seasonal cycles, etc …

Then we ask you: what are you doing to contribute to the sustainable development goals? What are the good practices you adopt daily? What are the difficulties you encounter instead? What do you think can help individuals improve their habits?